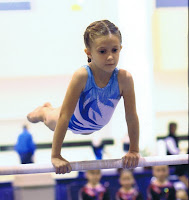 For years I have explained to my daughters on those rare occasions it’s come up that there are two types of people in prison. Those that are there because of things they did and those that are there because of who they are. Those that make mistakes can apologize and reconcile themselves with their victims. Neither of them deserves any place in my family’s life but at least with the former there can be an attempt at closure and redemption before we go our separate ways. But those that are just bad people must be stopped, and followed so they do not have the opportunity to repeat their offences – because they will.

One day a year ago, my wife was speaking with a friend. Her daughter was a gymnast. She shared one of her daughter’s routines during a meet on film with Meg. Our oldest, Alexa, saw it and mentioned it to Reese. That was the beginning. Soon Reese wanted to do what she saw on the video. We joined Zero Gravity Gymnastics because that’s where the older girl trained. Over the last year, Reese has fallen so deeply in love with gymnastics it is hard to imagine her not participating in this sport...

Our fundamental desire for both of our daughters’ participation in activities is to help reinforce the values we instill at home – among them: honesty, honor, commitment, and concern for others. In one weekend this fiasco violated almost every tenet Reesey holds dear plus some we wouldn’t expect an innocent 7 year old to even understand. She is a bright girl. She gets it. She knows there are good people and bad people. She just didn’t expect (and neither did we) to cross paths with criminals so closely, so young.

Some of the most wonderful memories have been related to our experience with Reese through gymnastics; and over the last week, we’ve had some of the worst. But now in the last few days the positive lessons and teaching opportunities have presented themselves. Meg and I are maximizing these opportunities to show Reesey that when bad people act out, the better people organize and fight to do what’s right. We’ve been able to evidence for Reesey the positive impact the Police and the media can have when trying to bring justice. I thank, from the bottom of my heart, every one of you who have joined together and moved in lockstep to bring justice to those who knew they were defrauding us parents and robbing our children of their trust for someone they held so dear.

Chrystal, Roger: You stole our money. You played us for fools. For that I’ll wish for you to get the justice you deserve. But, you cowards, in the process, you broke young hearts; you toyed with the innocence of children; you made our daughters cry, and for that… we won’t be stopped until you are. Do not for one moment doubt our resolve. Unlike you, we care for all children – not just our own – and that includes your potential future victims. As I have considered how I want you to pay, I find myself at a crossroads. I realize that there are other little girls that stand to suffer more than they deserve. These little girls are your own daughters. I do not take lightly the emotional damage that they could suffer witnessing your arrest or seeing you before a judge or even incarcerated. I am genuinely concerned that your children may be victimized by what I wish for you – which is more concern than you afforded Reesey when you chose to defraud us – but, then, that’s precisely what makes us different; and that’s precisely what makes this a Zero Sum game – there is no winner here, no truly positive outcome. At the very least, minimize your children’s pain and do what’s right before you’re compelled to.
Posted by Scoop on 4/23/2011 02:00:00 PM
Email ThisBlogThis!Share to TwitterShare to FacebookShare to Pinterest