A Congressional Referendum For Daytime Padiddle… 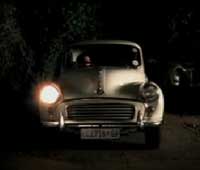 Remember Padiddle? Punchbuggy’s wonderful little cousin where one is beaten severely for being the last person in the car to notice an oncoming auto with one headlight burned out? Well, The European Union has announced a plan to have all automobiles in Europe equipped with “daylight running lights” which in effect is driving around with headlights on all the time. This got me thinking. What if we did this in the US? It’s been proposed. They say the effect on gas mileage will be minimal at best… Since I get nervously suspicious every time they start telling me what matters, I decided to whip out my calculator and start looking at the math…

In order to understand the magnitude of the effect this law would have in the US, we need to know some basic facts and then agree on some assumptions. I will be very conservative in my approach so all you out there who feel obligated to doubt the conclusions of this post (an attitude I respect) you can at least know the conclusions as far as I can tell are best-case – meaning it could be (and probably is) much, much worse.

Let’s start with the wattage of the average auto headlamp: 55 watts. Since most vehicles on the road have two working headlamps, that would be 110 watts per vehicle.

In order to complete our analysis we need to know how many miles are driven in the US annually. According to the Federal Highway Administration and the National Highway Traffic Safety Administration (NHTSA) 3,029,822,000,000 miles were traveled in the US in 2007. That’s 3 trillion with a “t.” (If you need some reference on the magnitude of that number see my earlier post “Million vs. Billion – A Drift To Innumeracy” from October of 2008.)

Still not convinced? How about this one: The above figures only factor in the headlights. The current proposals call for headlights but not any other lights. I ask which will be greater – the number of accidents prevented because the headlights are on, or the number of accidents caused because drivers (the same idiots that make this debate even necessary) are only paying attention to their headlights and forget to actually turn their lights on at night driving around with no rear lights or side lights? The solution, according to some law-makers, is to have all lights on constantly – sure Einstein; just double all the above figures – problem solved.

The only real upside I can see is more opportunity for games of Padiddle and the advantage that daylight will bring during those very serious matches. No more beatdowns because of those false-positive misidentifications of motorcycles – you’ll see’em coming… GO Congress! Instead of pulling out in front of cars at 1:00 pm because they’re somehow harder to see nowadays than they were 15 years ago (?!), we’ll all be beating the living shit out of each other like some kind of mobile cage match while screaming “PADIDDLE!” and driving head-on towards the moron with the one good headlight… awesome.

How about we just enforce the laws that say we have to freakin’ learn to drive, hmmm?? Is that too tough? Really…?
Posted by Scoop on 5/29/2009 01:00:00 AM
Email ThisBlogThis!Share to TwitterShare to FacebookShare to Pinterest