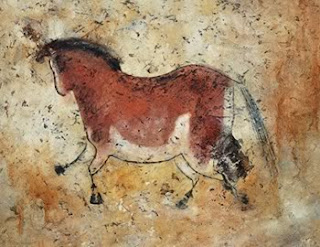 32,000 years ago outside a cave in what is now Southern France, monsters roamed the landscape. Inside the cave a Cro-Magnon group of Homo sapiens lived. They huddled around fires and fire-roasted beast. They told stories; they fought, procreated, played, and nursed children. They studied their surroundings through trial and error, and they built crude tools. They used these tools to hunt, make clothing, ignite fire, and decorate the walls of their cave with paintings. A few tools, some bones, and drawings on the cave walls are all that remain from what they left behind. But from these items and their art we get a fleeting glimpse of who they were. The 32,000-year-old remnants of life in the cave at Chauvet-pont d’Arc, France is a legacy that is slim in artifact but rich in art. It is a reminder that beginnings rarely resemble ends. It is a reminder that what we are is what we have become of what we were…

I envision a future where there is the possibility of no disease, no famine, 150 year human life spans, and the end of homework – an age of freedom. Not freedom as we define it today, but a freedom from uncertainty; but with a heavy price – privacy. We whine about the loss of our civil liberties now, just wait.

Science tells us today that alcoholics may have a genetic predisposition to the disease (which may actually be an allergy). That these genetic indicators could be used in the future to predict alcoholism in individuals who may have never taken a drink is a very real possibility within the next 10 years. But what if our genes can predict more than disease and physical attributes? Sure, Alzheimer’s, alcoholism, ALS, and azure eyes are all great arguments for furthering genetic research – after all, who would be so callous as to argue against furthering developments in a science that could predict ovarian cancer, macular degeneration, or Down’s Syndrome? But what if our genes could predict kindness, artistic ability, sociopathology, or even… murder?

In this century Science will be able to detect those markers in our DNA that indicate with high probability (if left unchecked or ignored; or in other cases undeveloped) what we will become. Genetic combinations will be identified that are indicators of intelligence or lack thereof in certain individuals. These combinations will indicate whether a particular person has the potential to become a musician, a professional athlete, or even a serial killer, and will become the starting point for developing that person. Some of these markers will be found to be universal indicators. I’ll call the list of universal markers in any given individual their G-code. Keeping in mind that our DNA remains constant through our lives we must accept the possibility that these G-codes will be identified at birth. This will open the door to the horror of knowing our strengths and weaknesses before we discover them for ourselves… But why stop at birth? It may well become a legal and viable reason in our future society for terminating a pregnancy… But why stop at abortion? It may even allow for the prohibition of procreation between individuals with a poor genetic nexus… But why stop at sex? These combinations might lead to legal and illegal communication between individuals altogether…

It is accepted by our society in general that (at least in children) explicit music, sex-infused movies, and graphically violent video games can lead to real-world violence, unacceptably-youthful sexual liaisons, and a general loss of innocence that is required to develop a strong conscience. Evidence of acceptance is our rating system, which wouldn’t exist if it were not an accepted philosophy. Television shows, theatrical releases, and video games are all rated on these scales. We accept them as reasonable and useful templates for what our children should watch or play. We recognize even today that developing minds can be influenced heavily by what they are exposed to, but we cast a very wide net over our entertainment media. Our current shotgun-approach to rating what we are exposed to is primitive compared to the surgical targeting in the future. In the future, television will not be rated as we do now. There will be no need… but more on that in a moment…

In the future we will carry identification that contains a chip that can wirelessly communicate. The chip will contain our G-code. As new universal genetic combinations and markers are found to be significant indicators of something or other, everyone’s code will be scanned for it and (if present) their G-code will be automatically updated on their chip. This chip will govern what we do and how we do it. When we try to purchase movie theater tickets our chip will be processed and based on the information in our G-code we will be allowed to continue or will be asked to choose a different movie. Groceries, music, radio stations, even books will be “G-scored” to protect us from heart disease, and negative influences. In the privacy of our homes we will have the opportunity to pre-score our purchases and desired influences.

Most states today issue magnetic-stripped driver’s licenses. On that magnetic strip is information germane to the individual it is issued to. Is it not a logical (if not short) leap to assume that future iterations of identification would include our genetic information? The chip will most likely not be in a card. More than likely it will be in an implant or some other technology that would prevent us from forgetting or misplacing it. It might also follow that it would be a crime to remove the instrument.

Don’t misunderstand me; I don’t necessarily believe we will be prevented from purchasing Ho-Hos and Big Macs (yes they’ll still be around) if our G-code contains the markers for heart disease and obesity, but rather, the information will be available to us as a tool for better self-managing our health. Likewise, there are those among us who smoke for 60 years and die from old age with no cancer; those that eat fast food regularly with seemingly no affect to health. Perhaps if your G-code doesn’t contain those markers identified as indicating you are susceptible to the effects of smoking or unhealthy food, you would be able to partake with reckless abandon…

They're watching you watch what you watch, so watch what you're watching… Based on their G-code, children may or may not be allowed to watch a television program. If a particular television set detects a minor with a chip that contains within its G-code an adverse marker for the chosen programming it simply won’t play the program.

All television sets produced on or after January 2000 contain a V-CHIP. A simple piece of technology allowing parents to restrict what their children watch on TV. My vision is no different in its intended purpose with the exception that my future iteration is not voluntary and is obviously more technologically advanced… I call it the G-CHIP.

I see the G-code and G-CHIP being used with children to a certain age and then, as they become young adults, most restrictions would be lifted. Only the most serious markers would remain in place. Adults will continue to utilize the chip to self-govern based on their genetic tendencies. And I can only assume that there would be 10-year olds viewing what would have been, in the past, R-rated movies and M-Mature rated games because the dawning of the genetic age will have separated out those who would be harmed. Whether you adopt a lighter version or a darker, more sinister version of my vision, I believe the above is inevitable. Whether we continue to allow genetic research to perpetuate unchecked and unabated as we do now or if we tighten our oversight on the research; the result will be the same.

Monsters lurk everywhere. Remember this the next time you’re extolling the merits and virtues of how we’ve mapped the entire Human Genome; remember that it’s incomplete and nothing now compared to what it’s going to lead to. Try to eschew your excitement and be still… because in all reality… monsters roam the landscape just outside… and that map is only something we’ve just painted on the wall of our cave…
Posted by Scoop on 9/17/2008 06:00:00 PM
Email ThisBlogThis!Share to TwitterShare to FacebookShare to Pinterest